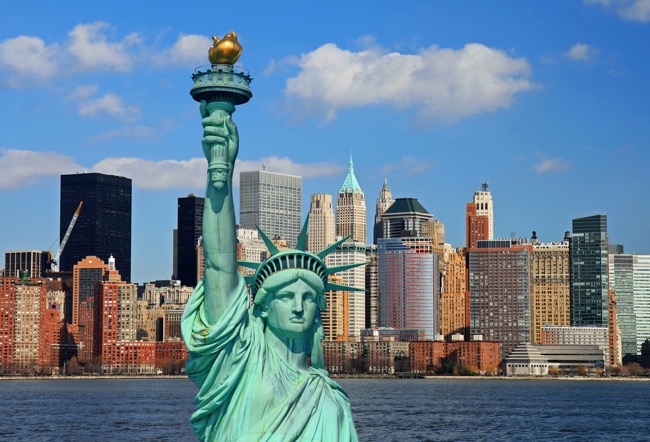 A trip to New York is an experience of a lifetime. Each of the City’s five boroughs has their own roster of must-visit attractions that will leave you simply awestruck! From iconic statues to quirky museums; historic neighborhoods to charming parks; popular bridges to cultural hotspots – NYC has all these and much more! Whether you’re an art lover or connoisseur of architecture or a history buff – you can come here any season and be surprised by endless possibilities.

Here are some of the top attractions not to be missed in New York:

#The Statue of Liberty

The Statue of Liberty is perhaps the most iconic symbol of the American dream. Towering above New York Harbor since 1886, Lady Liberty has mesmerized travellers from all parts of the world. Weighing 450,000 pounds and standing 151 feet tall, this symbol of freedom was France’s gift to America.

The towering spire of the Empire State Building is one of the most iconic of the NYC skyline. Upon completion, the 1,454-foot-tall symbol became the highest building in New York and it continues to be amongst the most famous landmarks of NYC. Opened in 1931, visitors to this archetypal building can get to see the view from two observatories on 86th and 102nd floor respectively and feel awed for sure.

Explore the first landscaped park of the country – NYC’s most famous green space. Offering skyscraper-bordered vistas in all seasons, it’s a perfect place for sunbathers, picnickers, ice-skaters and bird-watchers alike. Walking in or biking through Central Park is a must to include in the itinerary of many tourists visiting New York City. While on a leisure outing, you can visit some interesting places in the park, including Strawberry Fields, the Central Park Zoo, and the Lake.

A visit to the Metropolitan Museum of Art gives you the opportunity to explore the staggering collection of some 2 million works of art! This 18th century museum known as “The Met” is one of most visited landmarks in all of New York.

The museum is the largest art museum in the United States, and among the most visited art museums in the world. Its permanent collection contains over two million works, divided among seventeen curatorial departments. The main building, on the eastern edge of Central Park along Manhattan’s Museum Mile, is by area one of the world’s largest art galleries. From Van Gogh to Egyptian antiquities, the Met has it all.

The permanent collection also includes paintings and sculptures from nearly all the European masters, and an extensive collection of American and modern art. The Met maintains extensive holdings of African, Asian, Oceanian, Byzantine, and Islamic art. The museum is also home to encyclopedic collections of musical instruments, costumes and accessories, and antique weapons and armor from around the world. The museum is open 7 days a week.

When in New York, don’t miss visiting the grand entertainment and shopping complex that is Rockefeller Center. A hub of activity, it has shops, restaurants and an observation deck, not to mention the outdoor skating rink which is very popular in the winter! From here you can see the famous sculpture of Atlas, the 70-story Comcast Building (aka 30 Rock) and viewing spaces such as Top of the Rock, to the see the city skyline.

A trip to New York gives you the opportunity to visit the world’s first steel-wire suspension bridge– the Brooklyn Bridge. Opened in 1883, the bridge has been an American landmark inspiring many generations of poets, writers and artists. This grand bridge is a pure visual delight and a true architectural masterpiece featuring two imposing stone towers with Gothic-shaped arches.

Times Square is a happening place in New York. Named after the New York Times tower, it’s been a whirlwind of activity since 1904 and continues to draw visitors for shopping, theatres and restaurants. The site of the annual New Year’s Eve ball drop, the real charm of this place lies in its mammoth billboards. It was here that the Times newspaper used moving signs for the first time ever to post its current headlines.

Tourists going to New York City should not miss taking a walk around Wall Street and gazing up at the impressive skyscrapers. This popular tourist attraction is much more than just towering buildings as it’s considered the nerve-center of the American financial markets. In fact, some of the most important stock exchanges in the world are located around this street and the surrounding area. So, walk past the New York Stock Exchange, visit the Federal Reserve Bank building and marvel at these American architectural landmarks.

Visit these places on a New York City tour to understand the true spirit of this megacity!