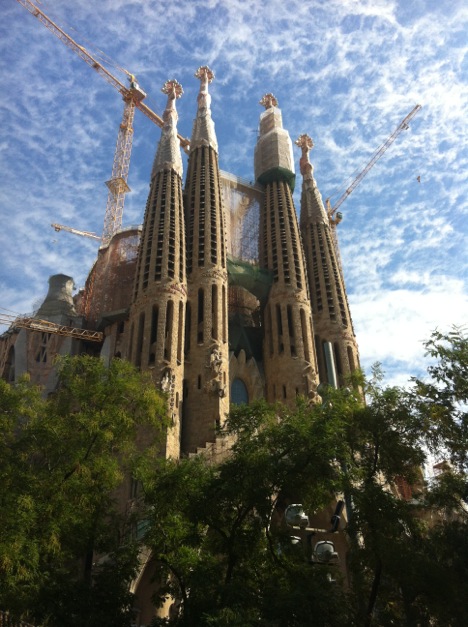 2. Park Guell. It is no secret that there are dozens of beautiful parks in Barcelona, but Park Guell is a definite stand out. By far the most interesting and impressive aspect of Park Guell is its garden complex. The complex was designed by Antoni Gaudi. Park Guell forms part of the UNESCO World Heritage. This maze like park is bursting with architectural designs by Gaudi, and it will take hours to enjoy every last bit of it.

3. Santa Maria del Mar. This is another famous cathedral in Barcelona that was built “by the people, for the people”. It’s a very impressive and simple structure from the outside as well as the inside (when compared to other cathedrals in Spain). It displays the gothic style that was popular in Catalonia. The cathedral is massive and inside it is very luminous.

6. Aduana Vieja. Aduana Vieja is located in Plaza Palau. This building features a neoclassical design with a very clear rococo influence. Inside, you will find displays of Pere Muntaya’s murals and art inspired by the classic adventures of Don Quixote.

7. Casa Milá. It was built between 1905 and 1910. Inside you will find lots of beautiful and inspiring sculptures. The building is also famous for its design.

8. Montserrat. Montserrat is not technically in Barcelona, but it is located only 40km outside the city. However, it is a favorite of thousands of tourists from all around the world. A Benedictine abbey built in the mountains, it is home of the famous “Black Virgin” of Spain.

10. Montjuic. Montjuic, which is also known “Hill of the Jews” is conveniently located on a hill in the city. In here, it is very easy to admire Barcelona’s beauty. The main attraction in Montjuic is a fortress located on top of the place.