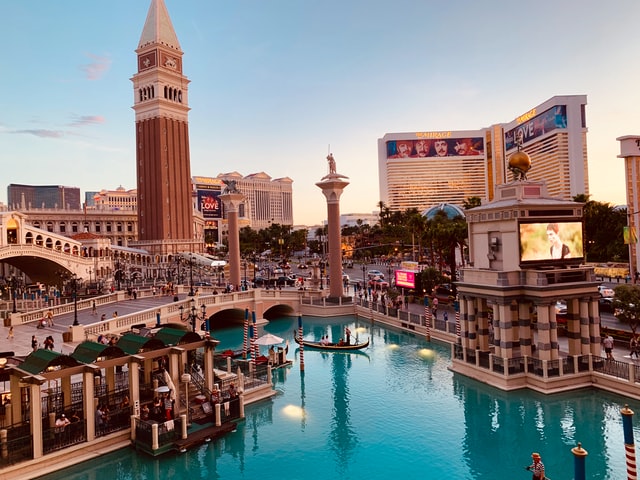 Gambling is one of the most popular hobbies around the world, particularly when it comes to online gambling which allows you to play all your favourite games without having to leave your home. However, there are some things the internet just can’t replace, and that’s the glitz, glamour, and excitement of a real-life casino.

If you do, however, decide that online casinos are your thing, check out the top list at casinostoplay.com, a review website for all things gambling.

The Venetian is a luxury hotel found on the Las Vegas Strip in the United States. The resort features 36 stories with over 4,000 hotel rooms, and it is home to the Sands Expo Convention Center, the Canyon Ranch Spa Club, the Grand Canal Shoppes, and one of the biggest casinos in Sin City.

The resort itself is known for being based on Venice, featuring canals and Venetian landmarks such as the Piazza San Marco, the Rialto bridge, and more. Meanwhile, the casino at the Venetian features over 1,000 slot machines, more than 130 table games, 37 poker tables, as well as a 24-hour sportsbook.

Casino Estoril is regarded as one of the best and largest casinos in Europe. The casino can be found just outside Lisbon in the municipality of Cascais and is situated opposite a beautiful beach. The casino, while not as glamorous as the others on this list, certainly boasts a great offering. The casino sites on a resort beside the Hotel Palácio and is home to several nightclubs and bars.

You can enjoy over 1,000 video slots, more than 30 table games, and a large poker room which hosts daily tournaments for players. What’s more, there are six restaurants which serve both Portuguese dishes as well as others from around the world. Finally, Casino Estoril was the inspiration behind Ian Fleming’s Casino Royale James Bond novel.

The Hippodrome is one of the biggest casinos in London which opened back in 2012. The entire venue is spread out over five floors in the Hippodrome building, including a Gold Basement. There are over 100 slot machines, 97 electronic Roulette machines, over 30 table games, as well as more than three poker tables.

What’s more, visitors can pop into Lola’s Underground Casino for more gaming opportunities under the casino and enjoy several high-class restaurants within the building or around Chinatown. Finally, the resort is home to regular comedy shows and other performances such as Magic Mike.

The Casino de Monte-Carlo is a gigantic gambling complex found in Monaco. The resort is located beside the Hôtel de Paris Monte-Carlo and, when combined, is home to seven restaurants, a celebrated wine cellar, four bars, a spa, a Country Club, a golf course, as well as meeting and events spaces.

The Casino itself is home to over 100 slot machines and over 50 tables for classic games including Baccarat, Craps, Blackjack, Roulette, and more. The Casino is famous for its glamorous design, as well for being used in 2004 film Ocean’s Twelve and James Bond movies Never Say Never Again and GoldenEye.