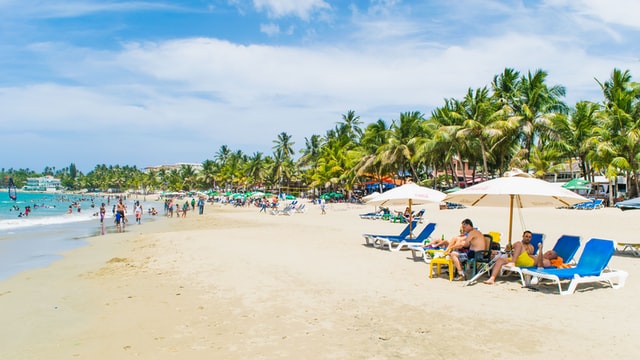 Now that COVID-19 vaccines are on their way, many countries around the world have taken a collective sigh of relief. The remedy couldn’t have come soon enough, with a second wave of the pandemic spreading just as the winter months arrive. Even though the global population is not out of the pandemic woods yet, the vaccine has provided a light at the end of the tunnel. As a result, people with cabin fever have started to venture out once again, or at least plan for their next excursion.

And while the vaccines are barely out of the gate, Americans, in particular, are looking to early 2021 to fulfill their travel aspirations in the Caribbean Sea. There is no doubt that the recovery in the travel industry won’t happen overnight. Nonetheless, there are some tourist destinations that are poised to benefit from the hopeful reassurance in travel. And based on anecdotal evidence, the sprawling beaches of the Dominican Republic are near the top of the list.

According to travel analytics company ForwardKeys, the Dominican Republic has become the second most sought after destination in the Caribbean searched for by Americans, comprising more than 13% of the total searches in this category for travelers who have set their sights on the first quarter of 2021 for their trips. Puerto Rico takes the top spot, while the Bahamas, Jamaica and Cuba round out the top five.

The Dominican Republic also ranks in the top five for searches in Canada, the UK, France and Spain. Its popularity is not surprising considering the strict preventative measures that the country has taken to stop the spread of the virus. The pandemic situation is fluid, however, and as of Dec. 22, the Dominican Republic has reportedly banned all flights from the UK through Jan. 10, 2021 as a result of a second COVID-19 strain. There are currently no travel restrictions for US citizens.

Previously, travelers had to provide proof of a negative COVID-19 test when they arrived in the Dominican, but according to Travel Weekly, that requirement has since been lifted and replaced with a rapid breathalyzer COVID-19 test. Arriving passengers must still complete a Traveler’s Health Affidavit and have their temperature checked when they arrive in the country. Anyone who tests positive for the virus must be quarantined until all symptoms have left.

Within the country, the Dominican government also participates in random coronavirus testing and is providing free pandemic-related medical insurance through Dec. 31, paving the way for tourists to feel confident about flocking to the Latin American region.

With global travel bans in place, the Caribbean was put in a precarious situation because there is not much inter-regional travel between countries going on, ForwardKeys points out in its analysis. This dynamic is much different than in, say, Asia or Europe, where cross-border travel is more prevalent within the continents. As a result, the Caribbean nations have had to turn their attention to “flight corridors” with neighbors such as the United States.

With European countries contending with on-again, off-again travel bans, however, it has been challenging for tourists to book their flights. As a result, there has been a shift in booking trends in which the lead time, or the time between booking flights and arrivals to the Caribbean, has essentially been cut in half.

For instance, between July and September in 2019, the average lead time for flights from the United States to the Caribbean was roughly 120 days. For the same period in 2020, it’s approximately 60 days. Meanwhile, ticket bookings to the Caribbean islands have revisited pre-COVID levels. 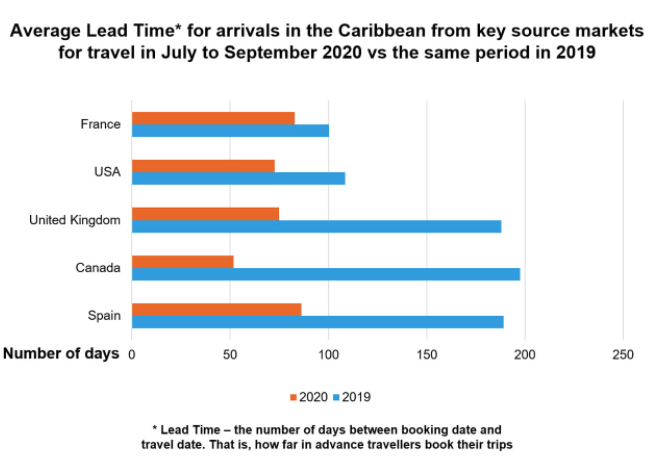 In addition to tourists, these travelers could be visiting friends and relatives from the Caribbean diaspora.

“The diaspora has an obvious reason to be leading the charge in wanting to come back to the Caribbean and there will be significant pent-up demand. Most people won’t have been back to visit friends and families since before March so they will be booking for Christmas and early 2021, hoping that restrictions allow them to travel,” said Carol Hay, business development director at the Caribbean Tourism Organization for the UK and Europe Chapter.

The Dominican Republic boasts both immigrant and emigrant populations, with 12% of its citizens currently living abroad, as of 2017 data. At that time, remittances comprised approximately 7% of the country’s GDP, which outpaced the flow of foreign direct investment. Incidentally, remittances in the Dominican, which largely originate from the United States, were on the rise in the first half of 2020, when money transfer flows were up fractionally vs. year-ago levels, according to Pew Research.

Given its strategic location of only hours away from Miami, Florida and New York, not to mention an eight-hour flight from Europe, it is considered the second-biggest and “most diverse” Caribbean nation. After closing its borders in the aftermath of the pandemic from April to June, the country reopened them in early July, since which time the airports have been working alongside government officials to enforce protocols and keep travel into the country safe.

A significant representation of Dominican migrants in the United States has benefited airline carriers, which are expanding the number of corridors between the states and the Caribbean. For example, United Airlines has introduced flights between Washington Dulles International Airport to Santo Domingo. Eastern Airlines is planning to add flights between the Dominican Republic capital and Miami, Boston, and Philadelphia.

The Dominican Republic has been out front with an aggressive Tourism Recovery Plan in which the Ministry of Tourism is collaborating with the private sector to ensure that tourists feel safe in the country. Some of the measures associated with this plan include the breath test for people coming into the country in addition to a “free traveler assistance plan” for COVID-19 related emergencies.

According to Minister of Tourism of Dominican Republic David Collado, no other country has gone to these lengths to bring about recovery in the tourism industry. They will have their work cut out for them; the number of passengers arriving in the country in September 2020 was more than 80% below year-ago levels. The Dominican Republic has registered nearly 162,500 COVID cases and close to 2,400 deaths.

Gerelyn Terzo is a staff writer at Sharemoney, a money remittance service that is passionate about improving the lives of immigrants. The granddaughter of an Italian immigrant from the town of Teora whose first steps in the U.S. were on Ellis Island, Gerelyn resides in New Jersey.