The Netherlands has always been a pioneer of fine arts and with the likes of Rembrandt and Van Gogh hailing from this part of the world it’s no surprise that art is well represented here. In addition, thanks to the reopening of the Stedelijk Museum and numerous fairs and exhibitions around the city, modern art is now very much on the agenda too. Those who are visiting Amsterdam for its art will be well rewarded with numerous art galleries and museums, as well as some very modern visual experiences – here are some of the highlights:

Amsterdam’s art galleries play a key role in its cultural landscape and there is such a huge variety that there is pretty much something for everyone. The Walls Gallery, for example, has a youthful vibe and focuses on new, young artists from the Netherlands, with a program of artistic diversity that puts an emphasis on painting and photography. At the other end of the scale is the Rijksmuseum, which is the state museum and one of the largest in the city – currently on show is ‘The Masterpieces,’ which is essentially all the best pieces from the museum’s collection whilst renovations are carried out in some of the museum buildings.

At the Van Gogh Museum you can uncover one of the greatest collections by one of the world’s most renowned painters. Some of Van Gogh’s best known pieces are shown here, including The Potato Eaters, Sunflowers, The Yellow House and Skull of a Skeleton with Burning Cigarette, and the museum also displays the work of some of Van Gogh’s Impressionist and post-Impressionist contemporaries, including Vincent van Gogh Painting Sunflowers by Paul Gauguin.

The Stedelijk Museum is another of Amsterdam’s famous institutions where you can see pre-war works by Cézanne, Picasso, Matisse and Chagall, as well as much more modern pieces by the likes of Andy Warhol and Roy Lichtenstein. The Stedelijk Bureau has a taste for the subversive and is a great place to include on a tour of Amsterdam for those who are looking for something a bit different, such as the sperm paintings of Arnoud Holleman. It is located in the Jordan district of the city, which is where many of the best art galleries are to be found, as well as being just across the canal from Anne Frank’s House.

Jordan has more than 40 specialist galleries that are cosseted away in homes or shops and some of the more secretive side of the Amsterdam art scene. Torch, for example, is a great place to visit for those looking for edgier art of the likes of Jake & Dino Chapman and Anton Corbijn. In the same area is Galerie Fons Welters, which is committed to uncovering new local talent and Curator Diana Stigter is one for those who like the strange paintings of Maaike Schoorel. As well as the official art galleries of Amsterdam, a tour of its art scene must also include the impressive amount of street art here. Expertly applied graffiti, stencil art and sculpture is around every corner with galleries such as Studio Apart having attempted to bring it into a more traditional setting. 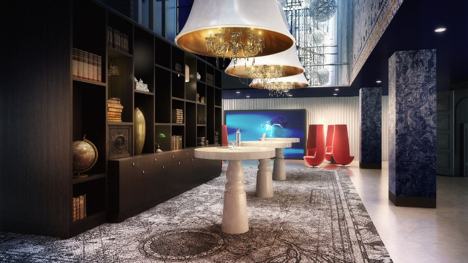 For modern art connoisseurs there’s only one place to stay in Amsterdam where the love of art meets 5 star service – the new Andaz boutique hotel in Prinsengracht with its walls adorned throughout with video art designed by Marcel Wanders who has been dubbed the Lady Gaga of design!

Whatever kind of art you love, Amsterdam is a city for art lovers. The diverse and exciting range of painting, graffiti, photography and sculpture makes this undoubtedly one of Europe’s most thrilling art hot spots.