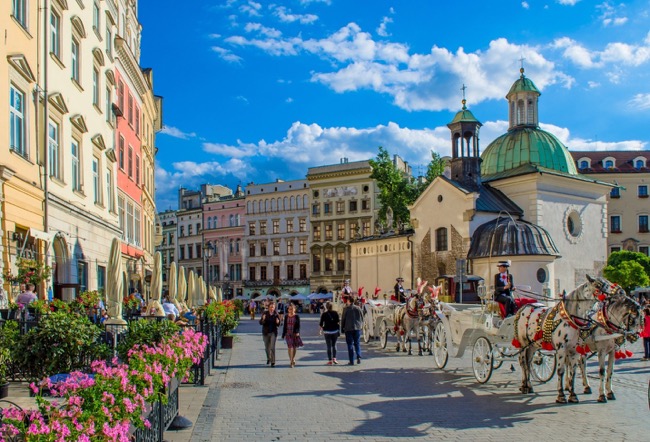 Autumn is a great time for travelling and seeing some monumental cities. One of the most beautiful and endlessly vibrant places in Europe is Cracow. In this city, not only can you see a lot of monuments but also have some great fun.

You can start you journey through the city with the walk from the Florianska Street directing to the Old Market Square. There is the historical Kraków Cloth Hall, St. Mary’s Basilica and the underground museum.

The underground museum joins history and the most modern multimedia

The entrance to the museum is located in the Cloth Hall, on the side of St. Mary’s Basilica. The tickets can be booked a couple of days earlier and collected at the designated time in the ticket office. This is the biggest underground museum in the world, it takes the space of over 6 thousand square meters, out of which 4 000 m2 belong to the archaeological site. The objects retrieved from the archaeological work, the remains of old streets and facades along with modern multimedia techniques provide unforgettable effect. It is worth to dedicate a couple of hours for learning the history of the city and feeling the atmosphere of the unique history of Cracow.

It is necessary to pass from the underground museum to the basilica, where e.g. two towers can be admired. St. Mary’s Trumpet Call is played from one of them each hour and in the second one there are the church bells. The most important work of art which can be admired in the church is the main altar of the German sculptor Wit Stwosz with the polychrome of one of the most prominent Polish painters – Jan Matejko. In the past, there was a cemetery expanding all around the St. Mary’s Church. Currently, there is one of the most beautiful nooks of Cracow – the Mariacki Square, decorated with the fountain with a boy made of bronze, which is the copy of one of the figures of the Mariacki altar.

Walking to the Wawel

If you spend your weekend in Cracow, you have to go to the Wawel Hill, straight to the Royal Castle, which is considered to be one of the best Renaissance buildings in Europe. While in Wawel, you can see various exhibitions, royal chambers, collections of war trophies, exhibits as well as famous Flander tapestries. When on the Wawel Hill, direct your attention to the cathedrals, the tombs of kings, bishops and other important individuals as well as to the Zygmunt Bell. At the end of the sightseeing, stepping by the castle walls, one must take a look at the picturesque Vistula River from the perspective of the arched courtyard.

From Wawel to the Dragon

The Wawel Dragon can be admired while descending the spiral stairs straight from Wawel. It is the protagonist of one of the most popular legends about Cracow and its symbol at the same time. Smocza Jama (the Dragon’s Lair) that can be visited is in reality a cave at the entrance to which there is a statue of the fire-breathing Wawel Dragon. This is a perfect place for the youngest tourists.

Mixture of culture and religion, namely taking a Jewish history lesson in Kazimierz

Kazimierz, the former Jewish district, is now the district of Cracow. It is located nearby the center, therefore we can move towards this unique place of cosy atmosphere in an unhasty walk. You can visit some synagogues in Kazimierz, e.g. The Old Synagogue or The Isaak Synagogue, The Centre of Jewish Culture, The Jewish Museum, and also spend some time in a restaurant serving Jewish meals.

Numerous nightspots, cafes, clubs – Cracow is the best choice for your Autumn time

Cracow teems with life all day and night long. No matter what weather Autumn brings, we won’t be any bored in Cracow at all. There are plenty of attractive nightspots awaiting us in every corner, cafes, pizza houses and clubs where you can dance or listen to live music, eat exquisite dishes or drink some locally brewed beer.

During Autumn weekend, it is worth to go to the close bearings of Cracow, especially to the rock salt mine in Wieliczka. This is one of the most beautiful objects of this kind in the world. All in all, it hasn’t been inscribed on the World Heritage UNESCO list unreasonably.