The great Indian festival, a confluence of humanity on a resplendent stage set by tradition and legacy – and it does not get bigger than these ten days in Mysore – the time of Dussera.

As the month of September winds down this year, the city of Mysore will come alive. The rest of the country celebrates Dussera for a day, but in this royal city of the Wadiyars, the celebrations continue for ten days. From a lit-up palace to the famous jamboo savari, it is a visual spectacle where you can immerse yourself in the legacy and culture of one of Southern India’s most storied cities. 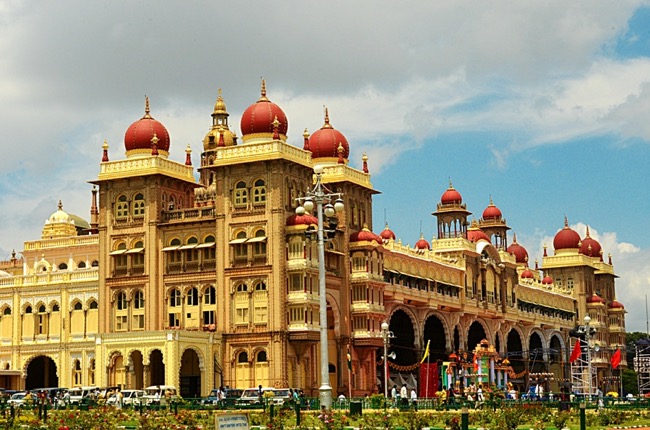 Mysore Dussera is the state festival of Karnataka and the city holds nothing back in showcasing the splendour and luxury that it is known for. The centerpiece of the city, the Mysore Palace is decked up with 100.000 lights during these 10 days of the festival.

The lights are on between 7 PM and 10 PM and the grandiose palace radiates majestically for miles. From photo-ops to just a sheer visual treat, this is one sight that can only be experienced in person. You can rent a car in Bangalore and enjoy the smooth 150 kilometer journey west to Karnataka’s cultural capital.

Dussera in Mysore is a nod to the legend of Mahishasura, a demon who was vanquished by the Goddess Chamundeshwari. The Chamundi temple, dedicated to the goddess is a pleasant winding drive up forested hills just outside Mysore and this important spiritual site is a hub of activity and rituals during the ten days of Dussera. The festivities commence when members of the royal family engage in the rituals that mark the beginning of the Navratri period. While exploring the Chamundi hills, you can also enjoy scenic vistas of the city below, especially evenings when the town sparkles in the lights. 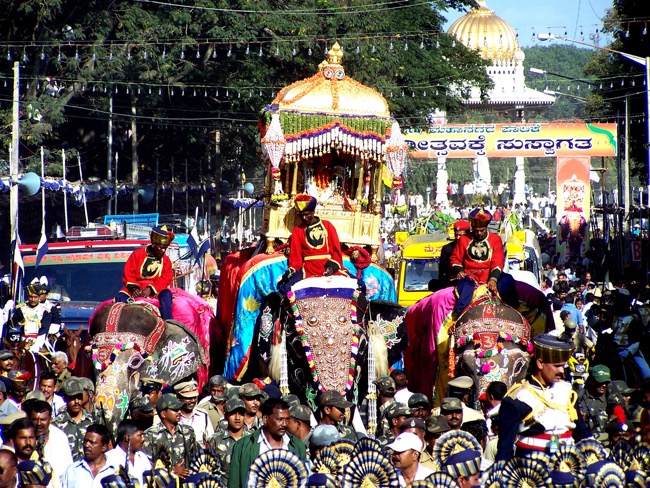 What better way to culminate the festival than with a short regal procession of elephants. The Jamboo Savaari is a parade that features royally decorated jumbos, traditional musicians and dance troupes and the idol of the presiding deity, Goddess Chamundeshwari, which is carried in a golden seat on one of the elephants. The Jamboo Savari was a much more elaborate procession in the days of royalty but has been shortened in the modern age and follows a route from the palace to the Dussera parade ground. You can book cabs to Mysore during the Dussera festivities and catch this annual spectacle.

One of the biggest attractions during the festivities is the exhibition, which is held across the main gate of the Mysore Palace. Spend an entire evening exploring and shopping at this exhibition, which has been on the festival calendar since 1880. At the sericulture department exhibition, you can shop for the famous Mysore silk and also learn and witness the silk weaving process.

The forest set-up is a permanent attraction at the Mysore Exhibition and is maintained by the state’s forest division. Amusement rides and game activities are also part of the attractions. Other items you can pick up include handicrafts, cosmetics, apparel and other local products. The fair is also a great place to go on a food trip.

For more than 400 years, Mysore has been the central attraction in a celebration that lights up the entire city. Dussera is the biggest festival in this part of the country and should be on your cultural itinerary. Find a reliable provider of Bangalore to Mysore cabs and experience the trip of a lifetime.