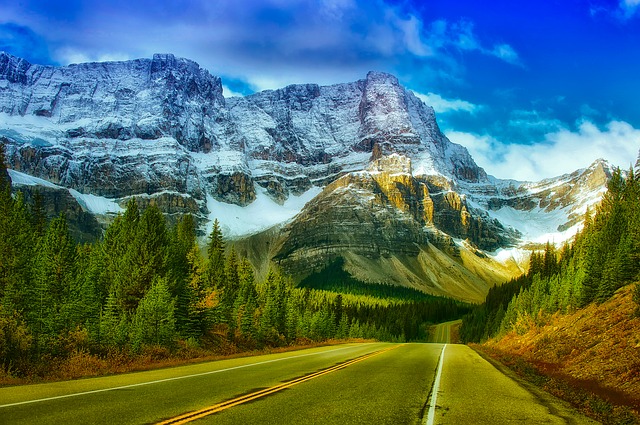 Canada has an abundance of nature to offer that reaches across the nation as a whole. The national parks in Canada have something to offer everyone, whether you’re looking for an exhilarating adventure, a relaxing break from daily life, or even a trip for the whole family.

One of Canada’s most infamous and equally beautiful examples, Banff National Park, located in the province of Alberta, is one of the only ecosystems still around today that has yet to be overly polluted and run down. Because of this, and the incredible experience it has to offer, it’s one of Canada’s most renowned national parks. Banff is, interestingly enough, the first national park declared in the nation since 1883. It shares the slopes of Canada’s Rocky Mountains backed by majestic scenery of an unparalleled region.

Moraine Lake is one of the best spots Banff has to offer. With hiking trails for visitors to trek and crystal blue water that comes directly from glaciers, Banff is truly one of the most gorgeous national parks to visit when in Canada. Still, you should be equipped with the right type of gear, like the best external frame backpack that will help you carry a few days worth of supplies.

Located in the province of New Brunswick and on the Acadian Coast lies Kouchibouguac National Park. With a mix of warm, sandy beaches, the ocean, salt marshes, and flourishing forests, Kouchibouguac is truly a wonderful place to be. The Dark Sky Preserve and the cultures of the Acadian and the Mi’kmaq are just a few of the many things visitors can experience when visiting this national park of Canada. There are seasonal events, including the snowbound fun-zone during the winter and a Mi’kmaq traditions at a Wigwam gathering during the summer.

The activities at the Kouchibouguac are great for visitors from all walks of life. Whether you are riding your bicycle along the many trails or paddling a Voyageur Canoe to witness the abundance of local wildlife with the family, there is an activity for everyone. The Kouchibouguac’s Voyager Canoe Experience is an educational experience on the First Nations of Canada and gives you a glimpse at gray seals, bald eagles, ospreys, and many other species of wildlife.

The southern areas of Kouchibouguac offer a campground with a variety of different sites. You can choose from an open, semi-wooded, or fully wooded campsite where you will definitely need the best ultralight sleeping bag. No matter which site you choose, it still has access to all of the activities and main features that this national park has to offer.!

British Columbia is the greenest province in the whole of Canada, and the Pacific Rim National Park Reserve is no exception. While it may be one of Canada’s newer national parks, which was established in 1970, it’s still the best place to visit on Canada’s West Coast during the summer. The major visitor favorite is the seemingly endless Long Beach, which is a strip of undeveloped coastline that goes on for 10 miles with a backdrop of mountains and an emerald-like rain forest.

Shipwreck Path holds the West Coast Trail, which goes on for a whopping 47 miles that lead directly through a pristine rainforest sandwiched between Bamfield and Port Renfrew. This region of British Columbia is also home to the Nuu-chah-nulth culture and people, who were expert whale hunters. Today, there are approximately 30 small reserves with tribes who reside within the boundaries of the park.

A lot of the best areas are only accessible by water, so those who enjoy kayaking and canoeing will enjoy paddling out to the Broken Group Islands, the mixed islands at Barkley Sound’s center, and many of the channels and waterways littered throughout the park.

Nova Scotia’s Cape Breton Highlands National Park was the first Canadian national park in the Atlantic regions and was established during 1936. The incredibly famous, and absolutely gorgeous, areas of Cap Rouge and the Cabot Trail are prime examples of why those visiting Canada must see them. For one, the Cabot Trail is a scenic highway that is known around the world. The coastal borders cross the highlands and both sides of the national park.

The Cape Breton Highlands National Park often comes with a saying, “where the mountains meet the sea”, because of the beautiful high and lowland settings. Elevated plateaus, northern species and their habitats, and river canyons with steep walls are just a few examples of why this saying is such a perfect saying for this national park. In fact, the park is widely known for the temperate and boreal species that you cannot find anywhere else in the country, which makes this national park that much more special.

The plateaus are part of the Appalachian Mountain chain, which stretches from the province of Newfoundland all the way to the state of Georgia in the United States. Wetlands, bogs, barrens, and coniferous trees dominate the area of this park. Moose, grouse, marten, hare, bald eagles, and even the endangered Canadian lynx are all animals who call the Cape Breton Highlands National Park their home.

The Gulf of St. Lawrence and the Atlantic Ocean brush the shores of this national park with sandy beaches, which are home to harbor seals, pilot whales, and minke whales. Within the wildlife areas of the park, there are approximately 230 species of various birds who frequent the whole of the region.

Cultural activities, recreational programs, seasonal amenities, a world-class golf course, multiple beaches, 6 campgrounds and 26 different hiking trails can be found throughout the Cape Breton Highlands National Park. Bird-watchers flock to the park during the summer for bird spotting and breeding activity, as well.

Canada has some amazing national parks that are an absolute must when it comes to visiting. These gorgeous parks are both old and new, but one thing is for sure: they are some of the most gorgeous national parks to visit when in Canada!