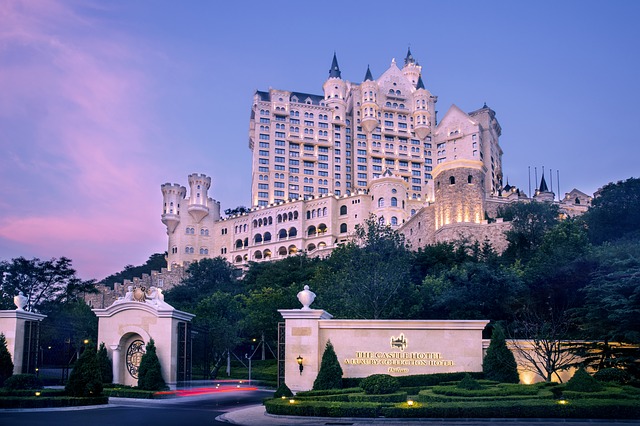 Dalian is a city and seaport in the south of the Liaoning Province in China. It is full of sites to see and things to do. However, if you are visiting for the first time, you may not know where to go or what to do to make the most of your time. Worry not, though, because in this guide we will show you some of the best sites to see on your trip to Dalian.

On the Golden Coast of the Jinshitan Scenic Area of the Dalian City of the Liaoning Province is the Dalian Discovery Kingdom. This is the second largest theme park in Northeast China at 116 acres.

The theme park has seven themed areas that make up the park. These include Crazy Town, Mysterious Desert, Metal Factory, Magic Forest, Legendary Castle, Wedding Palace, and American Avenue. Each of these areas holds their own unique characteristics and attractions.

The Dalian Forest Zoo was founded in 1997 and covers 7.2 square kilometers of land. It is well-known for its variety of species and areas in the extensive zoo. You can even oversee the entire forest on top of the West Hill which sits at 259.6 meters above sea level.

The zoo is split up into six sections including a garden-like herbivore animals section, a lions and tigers section, a chimpanzee and baboon section, the mountain-like bear section, the Asian elephant’s section, and the natural protection section with pandas, squirrel monkeys, and flamingos can be found. In total, the zoo is home to a stunning amount of more than 1000 animals of 130 species.

This museum is located just a few blocks from Xinghai Square and focuses on the history of Dalian, specifically from the year 1840 to 1949. For reference, 1949 was the year that the People’s Republic of China was founded.

The signage in the museum is Chinese, however, English pamphlets are available to explain the exhibits of war memorabilia and artifacts referencing the seven-year period of Russian rule. The museum also focuses on how the city achieved the economic importance that it holds today.

Zhongshan Square was designed in 1889 under Russian rule but many of the buildings and grand structures are from the 20th century, when Japan ruled Dalian – save for the Dalian Financial Building. The range of building designs ranges from art deco to the styles of the French Renaissance.

Zhongshan Square measures out at 223 meters wide. The square has 10 lanes radiating out from a central roundabout. The square also features the Dalian Bingua, a hotel featured in the movie The Last Emperor.

The Dalian Shell Museum is unique in both its design and its attraction. The building itself is one of Dalian’s key high-end construction projects. The building has four floors above ground and one below ground and features about 18,000 square meters of space.

The attraction of the Dalian Shell Museum is its collection of rare and precious shells. It features an attraction of more than 5,000 shells from around the world. The building itself uses an overlapping roof of QuadroClad that makes it look like an oversized seashell itself.

The Dalian Natural History Museum proudly stands as the largest natural history museum in China with some of the most advanced displays as well. It features exhibits on plant life, animals, research, exhibition, geology, and prehistoric life.

The museum itself was established in early 1907 and moved in 1995 to the Heishi Reef seashore. It reopened for public enjoyment in 1998, with an area of 15,000 square meters. The building itself is built in a modern European style.

In the southern beach scenic area of Dalian, you can find Xinghai Square. It covers 110,000 square meters of land, making it the largest city square in Asia. It was completed on June 30, 1997, for the return of Hong Kong. The Square is a mere five hundred meters away from the ocean.

Labor Park covers 560,000 square meters and makes up the largest park in Dalian. The architecture of the park mixes a Western style with Chinese traditional style, making for a beautiful blend.

The park’s centerpiece is a huge lawn lined with more than 300,000 flowers. Another attraction in the park is the giant white and red soccer ball that reminds every one of Dalian’s place as China’s “football town.”

There is plenty to see in Dalian, you just have to know where to go. Any of the attractions above are a must see when you visit Dalian on your next trip to China.