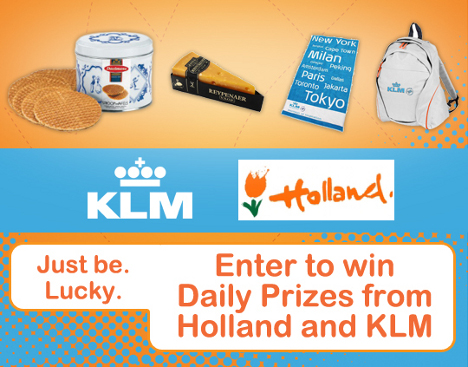 Win a World Business Class trip for 2 via KLM and a 3-night hotel stay in Amsterdam.

Cyclists have been chosen to go on the 10-City Bike Tour that is being sponsored by the Netherlands Board of Tourism and Conventions (NBTC) and KLM Royal Dutch Airlines (KLM). While the cyclist teams have been selected, Holland and KLM are giving travel fans an opportunity to follow the two teams along on their journeys to discover the magnificent sights and sounds of Holland. The first team, Victoria and Aaron, kicked off their 6-day tour on the South Holland trail on May 14th. Follow them as they experience the windmills, canals, their American roots, Masters of the Arts, food – specifically the city of Gouda for some cheese making, and much more that each historic city has to offer! The second team begins their journey on May 23rd!

Each day, the cyclists will upload photos and videos for your viewing pleasure! Tag along, engage with the cycling teams, and learn the ins and outs of Holland while getting the chance to win some awesome prizes DAILY in the 16-Day Giveaway! You have 16 chances to win a Holland prize pack including a KLM backpack, KLM beach towel, Holland bikeland photobook, Stroopwafels (Famous Dutch Waffles), cheese, and more – a retail prize value of $70!

Just visit the Holland and KLM Facebook page daily and answer a trivia question about the cyclists journeys and you could win! After you enter for the daily giveaway, press your luck and enter to win the GRAND PRIZE – a World Business Class trip for 2 via KLM and a 3-night hotel stay in Amsterdam!

Click on either link below to watch the cyclists daily logs, learn about Holland, and enter to win: