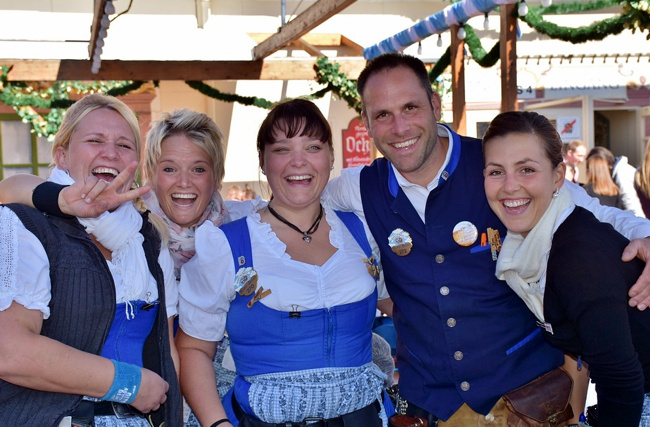 Oktoberfest is one of Germany’s biggest party times and has become a worldwide phenomenon. Sure we all enjoy having a drink with good friends and food, but it’s really much, much more than that! It is an age-old tradition that encourages us all to relax and celebrate some of the best aspects of German culture. I daresay that even a German culture fanatic might discover something new in these 25 facts about Germany’s Oktoberfest.

1.) The Mayor kicks off the festival

Oktoberfest begins only after the mayor of Munich taps the first keg at noon and cries “It is tapped!” or in German “O’zapft is!”. This takes place in Schottenhamel, which is the oldest beer tent at the Oktoberfest.

2.) It is not in entirely in October – it actually starts in September

It now occurs in September due to weather conditions. In 2017 the dates are from September 16th – October 3rd. Although most people only attend the festivities for a day or two as such enthusiastic partying can be quite taxing!

Attracting about 6 million people every year, I don’t think it will be overtaken anytime soon. And they go through about 1.98 million gallons of beer. It probably sounds like a lot and it really is! In fact, it is enough beer to fill three Olympic swimming pools. Oktoberfest was started in 1810 to celebrate the marriage of the Bavarian Crown Prince Ludwig on October 12th. The first beer halls appeared in 1986. Over the course of 200 years, Oktoberfest has only been canceled 24 times.

The largest beer tent is Kafers Wiesen Schanke and has 2,900-seats, many of which are occupied by celebrities. All Beer for Oktoberfest comes from just six Munich breweries. They are Hacker Pschorr, Hofbrau, Paulaner, Spaten, Lowenbrau, and Augustiner. There is even a special kind of beer for Oktoberfest, called Marzen. It is stronger than traditional beer with up to 6% alcohol. Traveling with children? Don’t worry! The Germans aren’t too concerned about them around the alcohol. In fact, they can stay until 8pm!

The Chicken dance has been a festival tradition for more than two decades. It is often a highlight of the frivolity and not to be missed! The Oktoberfest in Cincinnati claims to have the Worlds Largest Chicken Dance. But that isn’t all! Beer tents offer extensive entertainment with many sing-alongs. Most popular songs are Ein Prosit, Country Roads, and Asereje. Asereje, the fast-paced sing-along favorite, literally translates to “The Ketchup Song”. Outside, you will find the Fun Fair, which has been a part of Oktoberfest since the 19th century and its highlight is the 164-foot tall Ferris Wheel called Risenrad.

6.) Something Other Than Beer?

Yup! Oktoberfest has got you covered! Common food is Hendl, whole grilled chicken, potato dumplings and Shweinshaxe which are pork knuckles. There is no shortage of food with numerous vendors both inside and outside of the tents! There are also some traditional snacks you don’t want to pass on. The Gingerbread necklace (called Lebkuchen) is a staple of the Oktoberfest tradition. It is a heart-shaped souvenir that usually says “Ich Liebe Dich” or “I love you”. It is tradition to bring home a souvenir like this. There is also no shortage of sweets served at Oktoberfest. They are usually sugar-glazed almonds or cotton candy.

7.)There is an agricultural show put on once every three years

This was originally designed to boost Bavarian agriculture, but we still enjoy it today! You will find the agricultural show at the southern part of the festival grounds

The first Sunday in Oktoberfest features a Costume and Riflemen’s precession with approximately 8,000 performers. The parade itself is 7 kilometers long. It was first held in 1835 to honor the silver wedding anniversary of King Ludwig I and Therese of Bavaria. Since 1950, it has become a permeant fixture of the Oktoberfest celebration that is now streamed on numerous television channels.

9.) Cincinnati is home to the largest American Oktoberfest

It may not be authentically German, but they still do a pretty good job! German food like sauerkraut, goetta and rotisserie chicken grilled over an open fire pit are all great hits. The Germania Society sponsors the event and claims that their event holds the record for the Worlds Largest Chicken Dance.

10.) Perhaps one of the World’s Largest Lost and Founds

You might loose things at the Oktoberfest too- last year’s lost and found reported 1,300 items of clothing and more than 1,000 identity cards being lost, along with 425 lost keys, 390 lost cell phones, and 370 eyeglasses.

Don’t believe some of these stats? Go have a look for yourself! I think you will find the event itself surpasses its reputation.

Have you been there before? Let us know in the comments! We would love to know what you did for Oktoberfest!