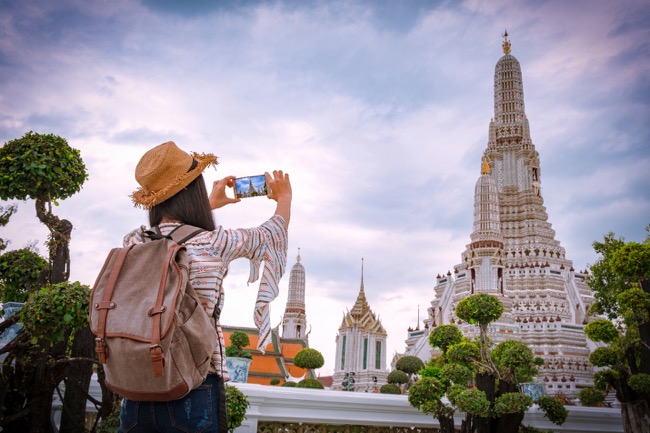 Southeast Asia has a charm that is unique in itself. The region, which is home to some of the most visited cities in the world, is a treasure-trove of rich culture and bewitching natural splendor. From adventure seekers, foodies and culture enthusiasts to history buffs, nature lovers and solitude seekers, people with different tastes hailing from different walks of life flock to Southeast Asia to realize their dreams of an unforgettable vacation.

Those of you who have booked cheap flight tickets to a destination in the region are in for a treat as Southeast Asia is ready to cast a spell on you. And in case you haven’t made any such plans, then do it soon because you are missing out on some magical moments. But before you hop-on an airplane, check out the best experiences the region has to offer and make the most of your time here.

Admire the marvelous complex of Angkor

The Angkor Wat temple complex in Cambodia is often touted as the “largest religious monument in the world.” The UNESCO World Heritage Site sprawling over more than 400 sq km encompasses forests and the remains of Khmer structures built between 9th and 15th centuries.

Get immersed in the nightlife of Bangkok

The Thai capital has a world-class nightlife scene which keeps the city swamped with party animals throughout the year. So, if you are a “young at heart” individual who just want to have a crazy time, then there’s just one destination that you need to visit in Southeast Asia – Bangkok.

Behold the enchanting islets of the HaLong Bay

The HaLong Bay in Vietnam is one of the most awe-inspiring sceneries you would ever see. It is defined by its soaring limestone cliffs, emerald waters and splendid islets. For a truly unparalleled experience, go for a kayaking tour.

Lose yourself in the tranquility of Pattaya

The coastal city of Pattaya is undeniably one of the most gorgeous destinations in the entire region. The turquoise waters of the Gulf of Thailand, white sand beaches and lush greenery lure nature lovers to plan a trip to this exotic place.

Venture in to the underwater world in Bali

The island of Bali in Indonesia is home to some of the best scuba diving spots in the world that brim with vivid coral reefs and other forms of aquatic life. The island has been hosting scuba divers from near and far who wish to dive in to the majestic waters of the Bali Sea and witness its magic.

Go on a tour of the Buddhist temples of Bangkok

The city of Bangkok is speckled with Buddhist temples that offer an insight in to the rich heritage of the locals and their way of life. Wat Phra Kaew, Wat Arun and Wat Saket are counted among the must visit points of interest in the city and should not be missed, especially if this is you first trip.

The country of Vietnam has undeniably been bestowed with a gamut of natural marvels but not quite like Hang Son Doong. Famed as the largest cave on earth, it was first discovered in 1991 and wasn’t explored until 2009. Regular tours are organized to give people a chance to witness just how large and gorgeous this cave is.

Click pictures against the backdrop of the mighty Petronas Towers

The iconic Petronas Towers in the Malaysian capital of Kuala Lumpur are a symbol of the city’s lightning fast growth in the past few decades. Though the city has a plethora of other tourist attractions to offer, the behemoth structure continues to be one of the most noted tourist hotspots in the city. So, do not miss to click a few Insta-worthy snaps with the towers as a backdrop.

Spend a fun-filled day with family at Universal Studios Singapore

Over the past few years, Singapore has built an image as one of the best family vacation destinations in the world and the reasons are aplenty. However, the biggest reason of them all is the incredible Universal Studios Singapore where you and your loved ones can enjoy the thrilling rides.

Take a leisurely stroll in Gardens by the Bay

Spanning over an area of 101 hectares, Gardens by the Bay, overlooking the Marina Bay, is a one-of-a-kind sight to capture. In here, you can also feast your eyes to one of the tallest indoor manmade waterfalls in the world. There’s absolutely no dearth of captivating sights here. No wonder it’s one of the most popular tourist spots in Singapore.

Sharing borders with India, China, Thailand, Laos and Bangladesh, Myanmar is renowned for its diverse ethnic groups. But what takes the cake is its incredible landscape of never ending forests that are marked with golden Buddhist shrines. You can hop on a hot air balloon in Bagan to admire the rugged terrain of the country from hundreds of feet above the ground.

A visit to Sultan Omar Ali Saifuddin Mosque is just as soothing for the eyes as it is for the soul. The white structure topped by a golden dome is often referred to as the “One of the Most Beautiful Mosques in Asia Pacific.” It is the pride of Bandar Seri Begawan, the capital of the Sultanate of Brunei.

Take a dip in the Hinatuan Enchanted River

Hinatuan Enchanted River is unlike anything you had ever seen. A deep spring river with its crystal clear blue waters have been a source of amazement for locals and tourists for a long time. But just admiring it is not enough. You have to plunge in to the water to experience the real fun of visiting the place. So, when are you visiting the Philippines?

Marvel at the chocolate-colored hills in Sierra Bullones

Sierra Bullones has what many have described as giant chocolate kisses. Hence the name Chocolate Hills. The region is dotted with more than 1,200 individual hills soaring up to a height of almost 400 feet. Though there are several theories, there is no specific consensus on how these hills were formed. However, almost everyone who captures a glimpse of this intriguing landform agrees on one thing, that these are simply a nature’s wonder.

In order to compete with the better-equipped U.S. military and South Vietnames forces during the Vietnam War, the people of Vietnam built a vast network of underground tunnels that kept the opponents confused at each step. These tunnels today are a symbol of the unflinching resolve of the Vietnamese people.

So, all you globetrotters harboring dreams of unveiling the best that Southeast Asia has to offer, here’s your bucket list. Just grab the best international flight deal and have a ball.