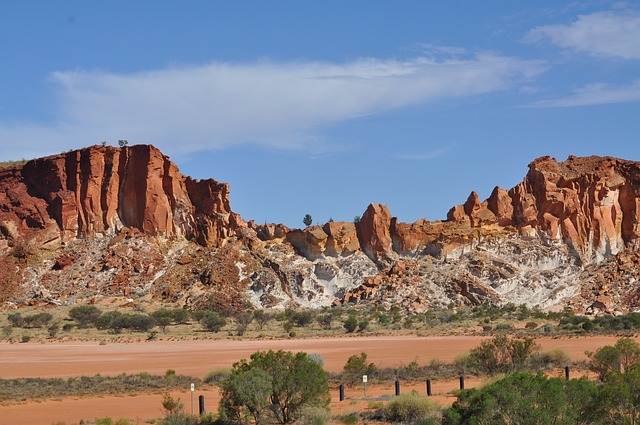 When it comes to visiting or touring Australia, you absolutely must take in one of their most beautiful and popular attractions: Alice Springs. This heart of Central Australia is also known as the Red Centre, for the color of the soil and the many deserts and their colors that makes up this area. This city makes visiting the Northern Territory absolutely worth the journey and will also help further your understanding of the history of this geographical area. With many notable features, this city boasts roughly 27,000 inhabitants and offers plenty of natural as well as cultural attractions.

The city used to be a town known as Stuart – the name was changed in 1933. Stuart truly began to get settled in 1887, when alluvial gold was discovered in the neighboring area. They named the Todd River after Sir Charles Todd, Postmaster General of South Australia, and the city after his wife. The city became quite well known as a result of its involvement in World War II as an active staging and depot base, receiving evacuations from Darwin and becoming a war-time capital of Northern Australia.

Today, the city is known for its arts and happenings as well as its natural wonders. The city is nestled in between mountain ranges and features striking red sand and dirt. You can also explore the outback of this Northern territory– check out the Larapinta Trail, Simpson Desert, Devils Marbles, Kings Canyon, Uluru, and Kata Tjuta if you’re visiting. The Larapinta Trail is a challenging hike that lasts 139 miles. How far you go is up to you, but the trail boasts peaks, gorges, and swimming holes along the way.

You can also find out more about Aboriginal history and culture. The area features rock carvings and designs that go back thirty thousand years. The city is also the birthplace of the Western Desert art movement began in the seventies by a schoolteacher to the locals. These days you can see the products of the Western Desert movement in the many galleries that the city has. tourists may be interested in visiting the Papunya Tula Gallery, directed by Western Desert Aboriginal people. You can also visit the Araluen Arts Center or the many galleries that make up Todd Mall.

Todd Mall and the Alice Plaza are also part of the area attractions. Visitors can enjoy multiple cafes, galleries, and places to eat. At Alice Plaza, you can go for a dessert and coffee at Jade Ebony’s Cafe or grab some juice or a smoothie from Nature’s Brew Co.– and you can even have a go at walking around in Target if you like! Of course there are many other stores to see in Alice Plaza, including Fawlty’s Fine Food, Alice Plaza Pide & Kebabs, Desert Wave for clothing, and Desert Beauty for beauty treatments, to name a few.

If you’re interested in history, there’s plenty to take in. Visit the Araluen Cultural Precinct where you can learn more about the culture of Central Australia. Visit the Museum of Central Australia and learn more about the history of the area. You can also visit the Albert Namatjira Gallery, the Telegraph Station Historical Reserve, or the School of the Air Visitor Centre.

You can also find natural beauty everywhere you look. Anzac Hill offers views of the area and the MacDonnell Ranges. Speaking of which, the West and East MacDonnell Ranges are not only beautiful, but they host a treasure trove of natural destination spots. You can check out the Finke Gorge National Park, the Ormiston Gorge and Pound’s cliffs and freshwater swimming holes, visit Simpsons Gap (home to black-footed rock wallabies). You can hike, camp, take a car, or even a plane to see the Ranges’ magnificent beauty for yourself. The range is also home to the Larapinta Trail, which many people hike; whether full or partially is up to you!

Other Alice Springs attractions to check out include The Kangaroo Sanctuary, where many furry friends reside. You can visit Kings Canyon, an ancient formation of rock faces in Watarrka National Park– home to hundreds of plants, animals, and the Luritja Aboriginal People. Or go to the Desert Park and take the nocturnal tour to see wildlife like echidnas and mala up close with your headlamp! After that, visit Uluru and Kata Tjuta, rock formations that are truly impressive. If you’re in town at the right time, check out the Camel Cup, Beanie Festival, or Tatts Finke Desert Race. Of course, the Reptile Centre is a must if you have kids.

Visit this unique area and come see one of the best-known cities in the Northern Territory. Bring your sunglasses and your willingness to have fun and learn, and you’ll have a grand time! Everyone should visit this unique Australian city at least once!