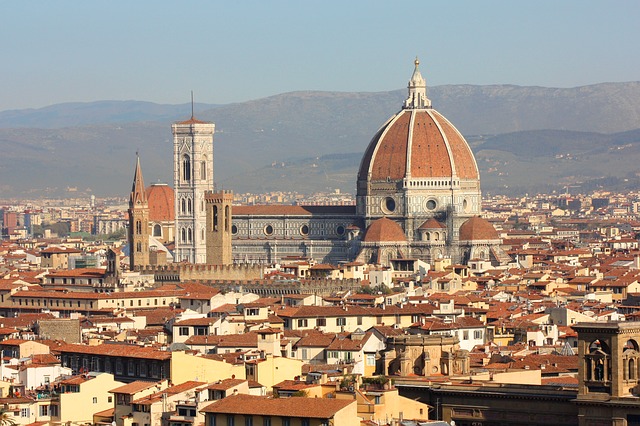 The city of Florence (Firenze in Italian) is renowned as being the birthplace of the European Renaissance era. Florence is the capital of Tuscany and was one of the richest cities in medieval times. Seeing firsthand the cradle of Renaissance is a vivid and memorable experience which interweaves ancient Italian history, art, culture, architecture, monuments with modern streets, fashion shops, parks and squares.

Florence well connected to flight around Europe from its airport, but you will find cheaper flights from Rome or Milan, which are the biggest hub airports in Italy offering international connections. If you are coming from within Europe there are low cost airlines that fly to nearby Turin. From Florence or Turin you can arrange tranfers with https://www.taxi-airports-transfer.com/ to get from the airport to the city centre.

The most visited place in Florence is, by far, the domed cathedral Basilica di Santa Maria del Fiore, situated in Piazza del Duomo, a famous square which also includes Giotto s Campanile and the Baptistery, all three Gothic Renaissance style buildings being part of the UNESCO World Heritage Site which covers the historic centre of Florence. The dome of the basilica is the largest brick dome ever constructed.

Another building that should be visited is the Basilica of San Lorenzo, which contains the chapel of the Medici family, the most influential family in Florence from the 15th century to the 18 the century. The political dynasty known as the House of Medici founded the Medici bank, a respected and prosperous European institution and the Medici was the wealthiest family in Europe. This church is considered the oldest church in Florence, whose patrons were the Medici family. The structure called the New Sacristy was designed by Michelangelo.

While you are exploring the history of Florence, you should also visit the 14th century Palazzo Vecchio, the city hall of Florence which overlooks the Piazza della Signoria, an L-shaped square which represents the origin and history of the Florentine Republic and to this day, it is still the political hub of the city.

Other favorite sights include the basilicas such as Santa Maria Novella, the first great basilica in Florence and Santa Croce, the main Franciscan church in Florence. Santa Croce is also famous for being the place where Michelangelo, Galileo Galilei, Niccolo Machiavelli and Rossini are buried and hence it is called the Temple of the Italian Glories. Cultural tourism is highly important for Florence, a city which is considered to have the largest concentration of art. The Uffizi Gallery is the most visited museum in Florence and one of the oldest art museums in Western Europe. It displays impressive collections of famous paintings from Italian artists including Leonardo da Vinci, Michelangelo, Raphael, Titian, Botticelli, Giotto, Caravaggio, Piero della Francesca and also Rembrandt, to mention just a few.

Tourists also love to take a walk around the city or sip a cup of coffee in one of the many cultural cafes or feel the vibrant Italian atmosphere in the famous Florence piazzas or squares, such as the Piazza della Republica, Piazza Santa Croce, Piazza Santa Trinita, near the Arno river, Piazza San Marco and Piazza della Liberta. On the side of Boboli Gardens, a famous park in Florence, home to Florentine sculptures from 15th to 18th century, lies Palazzo Pitti, the Medici residence, which was also used by Napoleon as a power base. Nowadays this is a museum complex housing over 500 Renaissance paintings.

Another Florence icon is the Ponte Vecchio (Old Bridge), which overlooks the Arno river and where you can find a large number shops held up by stilts, as well as Vasaris elevated corridor which connects the Palazzo Pitti to the Uffizi Gallery. This bridge in the only one in Florence which was not damaged during World War II.

And since you are in the very heart of Tuscany, one of the great wine-making regions of the world, you should not pass the opportunity to taste the Chianti wine at its home. The region of Chianti is south of Florence and the Sangiovese, Sassicaia and Ornellaia red grapes are renowned worldwide for their strong aroma and herbal and bitter cherry notes.