Europe is a place with a rich, deep, and curious spiritual history, resonant with charity, piety, and religiosity of various forms. Though the continent and its adjacent islands have been traditionally associated with Christianity, and it is certainly true that believers in Jesus have produced plenty of spires and sculptures worthy of wonder, plenty of other faiths have produced many a site with sights worth seeing. The next time you find yourself amidst the Occident, try some of the following places to get a vision of the world beyond the veil as viewed from a uniquely European perspective.

For those with a more gothic slant to their sensibilities and interest, this Church is perhaps the closest thing to Mecca. A small Roman Catholic chapel, located on the outskirts of Prague in the suburb of Kutná Hora, from the outside it may seem pleasant and somewhat quaint, but also unassuming and potentially dull, especially in the context of the surrounding areas where many other similar looking buildings can be seen. Once you get inside though, the story changes dramatically. The Sedlec Ossuary contains, and is partially constructed from, between 40,000 to 70,000 skeletons, most of whom died from the black death or the Hussite wars. At the centre, hanging from the ceiling there is an enormous chandelier of bones, containing at least one of every bone known to be found in the human body. To see more about this temple to the temporal nature of all human life, read here. If you are wanting the truest possible experience of the macabre side of faith, there is nowhere better to visit.

Following the construction of what was then known as the Church of Holy Wisdom, in the year 537 CE, the Byzantine emperor Justinian was reported to have visited the grand construction he had commissioned, and made the grand declaration “Solomon, I have surpassed thee” in reference to the first Jewish Temple. The Hagia Sophia is a monumental construction of a kind that was so important one modern New York Times commentator claimed that it “changed the history of architecture”. A rich home of various beliefs, it has been both a cathedral for the Byzantines, the Greek Orthodox Church, and the Roman Catholics, as well as a Mosque for Sunni Muslims, before finally coming to be a Museum in 1935. Take care with travel here at certain times of the year, as though the building is no longer an active holy building, its religious overtones are still deeply important and very much present. For more information on perhaps the most important festival of the faith that most recently occupied the Hagia Sophia, read this guide. A true jewel in the crown of the history of this country that straddles east and west with grace and beauty

The Turf Church of Vidimyri, Iceland 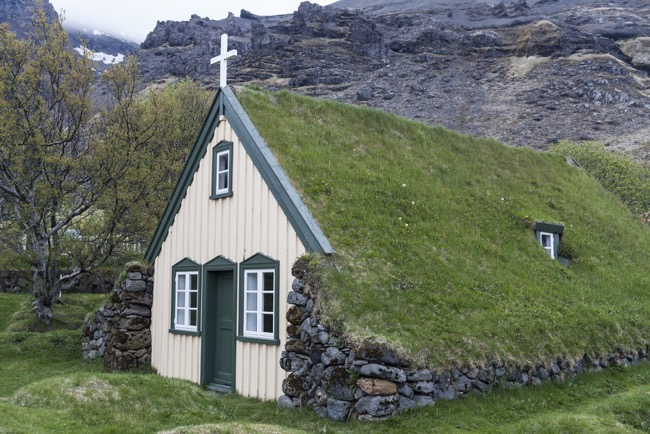 Most spiritual sites that list highly on tourist’s travel itineraries are usually chosen because of their striking additions to the skyline, or their intrinsic artistry within. Yet in the case of the Turf Church of Vidimyri, it is more a place of historical oddity that is worth visiting for its sheer unusualness. In a deeply isolated and distant area upon the island of fire and ice, the Turf Church of Vidimyri is a retreat from the world that seems almost embarrassed to intrude on the sculpture that is God’s creation. With its building work poking out of the ground and a curious hobbit-hole-like construction, this building has such reverence for its creator that it would seem to have been designed to quickly go back and rejoin the land from whence it came. Dating back to the fourteenth century, this is a site that charts the history of the Christianisation of Iceland. If you want to get a sense of holiness away from the cares of the world, this is the place to come. Read here to find out more of the history of this peculiar place.

A well-known site, that despite is fame is more mysterious than ever. Its original purpose is still very much the subject of deep speculation, with guesses ranging from some kind of season-tracking calendar, to a final resting place for scores upon scores of hallowed dead, an ancient celestial observatory, or even some kind of pre-Roman holy music venue. In the modern time, the people who most closely claim ownership here are the modern inheritors of the druidic faith who make pilgrimages here at each of the solstices, yet it is still open at other times of the year to come and be marvelled at. Not only does the site make for fantastic photographs and picturesque memories, but there is also something truly spiritual about reflecting on this great and monumental site, that no one will ever truly understand.

However you find your way around the continent, whether it’s a tour of revelry or reflection you are seeking, the next time you go there, consider these curious places as potential pointers on the roadway of your life, wherever it takes you.