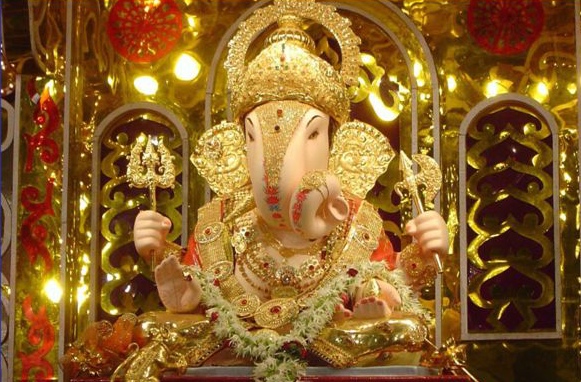 Lord Ganesh always has had a special connection with Maharashtra and more so with the city of Pune. Lord Ganesha was widely worshipped in Pune long before Lokmanya Tilak started public celebrations of Ganesh Chaturthi to bring people together for the freedom struggle. Pune is home to some of the most famous and ancient Ganesh temples. One cannot visit Pune and miss the magical atmosphere in the Ganesh temples. The devotion and fervour of the devotees will definitely make you fall in love with the city. The standard Pune darshan may not include all the temples, so you may have to explore some on your own.

The most iconic Ganesh temple in Pune is undoubtedly the Dagduseth Halwai Ganpati Temple. Tourist not only from India but from across the world visit this temple to offer their prayers. The temple which is situated close to the Budhwar Peth was constructed in 1893 by Dagdusheth Halwai (Sweet Maker). Dagdusheth Gadve who was left grief-stricken on losing his son to a plaque, decided to construct the temple on the advice of his guru.

The idol is 7.5 feet tall and 4 feet wide with some beautiful delicate work that makes the idol life-like. The Dagduseth Halwai Ganpati Temple has such a layout that the idol and proceeding inside the temple can also be seen from the outside. It is believed that idea of celebrating public Ganesh festival originated during the construction of this temple.

A Ganesh idol that is perhaps even older than the Dagduseth Ganpati is the Kasba Ganpati. It is believed that in 1630, Jijamata, King Shivaji’s mother found an idol of Lord Ganesh and considering it as an auspicious moment decided to build a temple. Kasaba Ganpati is considered as the first deity and protector of Pune. Hence, during the annual Ganesh Idol immersions, Kasba Ganpati leads the procession and is immersed first in the river. It is located near Shaniwar Wada on Kasba peth.

The Trishundya Mayureshwar Ganapati Temple is one of the hidden gems of Pune. The temple is not as famous as other temples in Pune, but the temple stands out due to its unique architecture. Located on the banks of Nagazari on Somwar Peth, the temple was built in 1770 by Bhimgirji Gosavi. The rock-carved temple possesses beautiful sculptures of ‘dwarpalakas’, elephants in combat, parrots, and carved peacock. The idol itself is unique with Ganpati having three trunks, six hands and astride a peacock.

The Dashabhuja Ganpati Temple is a renowned temple in Pune mainly due to the idol of deity inside the temple. The trunk of Lord Ganesha idol is turned towards the right side which is considered divine according to the Hindu belief. It is believed that the temple was built by the Peshwa Sardar called Haripant Phadke during the reigns of Peshwas. The positivity inside the temple is radiating, and you will quickly start experiencing the positive aura. There is also a temple of Lord Hanuman in the premises.

Finally, barely 65 km from Pune city and within the Pune district, there is an iconic Ganesha temple called the Shri Moreshwar temple. Alternatively known as the Mayureshwar Ganpati Mandir, this temple is the first temple among the Ashtavinayaka temples of Lord Ganesha. According to the Hindu belief, the holy visit of Ashtavinayaka temples should be concluded by re-visiting the Moreshwar temple. The temple was built with black stone and with four gates as well as four minarets. The idol of the deity is made of an alloy of five metals while a Cobra encircles the deity’s head. There is a six-foot mouse at the entrance of the temple. You should also see the 23 idols of Lord Ganesha in the assembly hall each depicting different forms of Lord Ganesha.

Visiting all the temples in a single day is possible without exhausting yourself. If you intend to travel further to Mumbai, Mumbai to Pune taxi service is a viable option with fixed rates and decent frequency. Visitors coming from outside Maharashtra should ideally visit both cities of Pune and Mumbai together to save time. Pune car rental is available if you are planning to explore the city throughout the day.