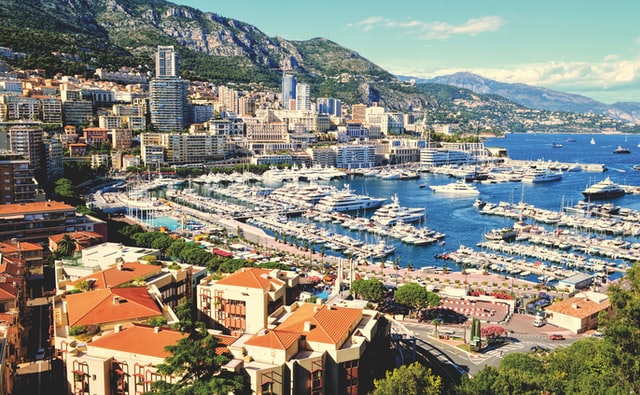 Known as probably the most luxurious place on the Planet, its size is not bigger than only two square kilometers. Even so, it will not fail to disappoint you if you are planning a trip to marvel at the beauty of luxury. After all, the best things are found in unexpected places, right?

Part of the French Riviera, even nature has a lush feeling to it, thanks to the climate influences of Côte d’Azur: warm, perfect weather, sea of a deep blue, flowers that complement it with their lively colors and elegant palm trees.

Of course, the beauty of nature isn’t the only thing that makes Monaco one of the most exquisite tourist attractions. There are many points of interest that will impress you not only with their looks, but also with their fascinating history.

You might recognize it from the famous James Bond movies, like ”Casino Royale”, ”Never Say Never Again”, or ”Goldeneye”, but the truth is, it wasn’t the casino that benefited from the success of the movies, it was the movies that got their prestige from the beautiful casino.

Therefore, what makes it such a big attraction? Well, even the history of the place is good enough to lure you in. The building that we can admire today was designed by the renowned architect of the Paris Opera: Charles Garnier, in 1879. Its origin story can be quite surprising for a place like Monaco, but the casino was supposed to be a way for the ruling Grimaldi family to become financially stable and as we can tell today, it turned out to be a successful plan. Up until recent years, the Grimaldis weren’t the only ones that were helped by the casino, as the economy of the Principality of Monaco has also flourished because of it! That being said, we can only imagine the power that this place has.

The casino complex does not host only the gambling and entertainment area, but also the Opéra de Monte-Carlo and the quarters of the Les Ballets. If your online casino games ever made you wonder how it would feel to actually be in that glamorous atmosphere, the Casino de Monte Carlo is sure to fulfill you that wish.

Speaking of the Grimaldi family, they are actually the oldest monarchy in the world. Palais du Prince is their home and it can be found on the peninsula of Le Rocher, overlooking the sea. The breathtaking view actually served a crucial purpose back in the 13th century, as it allowed the whole surrounding area to be observed, the palace first being a fortress when it was built.

As a visitor, you can admire the Hercule Gallery that shelters frescoes from the 16th and 17th centuries, the Blue Room, a place that hosts official state events, the Throne Room, where the official ceremonies take place, or the wood-paneled Mazarin Room.

La pièce de résistance are the Palatine Chapel and the marvelous double staircase built of Carrara marble, found in the Main Courtyard. If you are lucky enough, you can even catch the Monte-Carlo Philharmonic Orchestra performing there.

3. The Cars Collection of H.S.H. the Prince of Monaco

If you are a car enthusiast, Monaco has this covered too. You can find the simply amazing collection of vintage cars on the Terraces of Fontvieille. It holds about 100 models, all built by well-known both American and European car factories, like Ferrari, Maserati, Rolls Royce or Lamborghini.

The full car experience of Monaco can be met if you also attend the Formula One Monaco Grand Prix, the local car race that is also unique for its location: the city streets. It takes place once a year, on the last weekend in May. It is true that because of the narrow streets, the place isn’t ideal, but the tradition must be met, as it has been going on since the early 20th century.

We hope that this brief, but intriguing description of these amazing places made you as fascinated as we are of Monaco, and to think this isn’t all! These are just a few of the spectacular places Monaco has to offer, even though it is such a small place. You can also find beautiful gardens that expose the luxury of nature, or cultural centers like the Opéra de Monte-Carlo, or the Fort Antoine outdoor theater. We would book the closest trip if we were you!