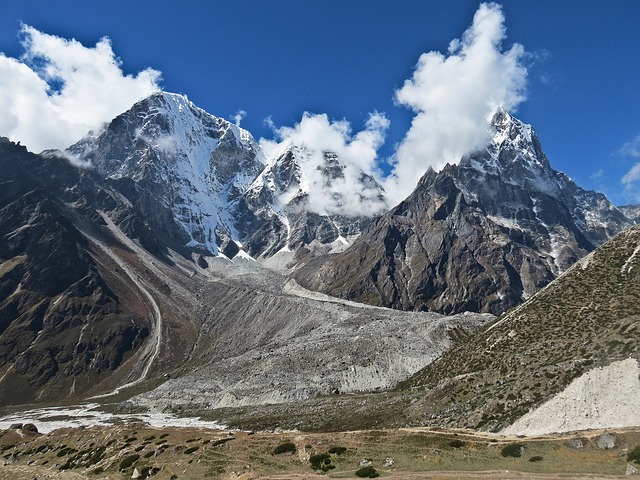 Nepal is a trekking mecca. It’s a country on every adventure travelers’ bucket list. Home to eight out of ten of the highest mountains in the world, it offers some of the world’s best treks in an environment unrivaled by any other place on earth. It’s also one of the cheapest countries to travel. There’s no doubt about it — Nepal is a trekker’s dream come true, and the main reason why it attracts hundreds of thousands of tourists every year.

Below you’ll find 15 of the best treks in Nepal, from the most famous to the ones flying under the radar:

Probably Nepal’s most famous trek, the Everest Base Camp (EBC) trek takes you to the lap of the world’s highest mountain. Officially starting and ending at the airport Lukla, located in the Everest region, the trail to EBC (5,364m) offers unmatched views of four out of six of the highest peaks in the world, including Mt. Everest. Nights are spent in “teahouses” in some of the highest villages in the world and there’s a chance to explore various Buddhist monasteries along the way. While the vistas are nothing short of breathtaking, hikers will also be exposed to a heavy dose of Sherpa culture. If you’re looking to trek to Everest Base Camp, we recommend you to check the EBC packages at Bookmundi.

The Annapurna Base Camp (ABC) trek is a household name in avid trekker communities. Starting off at Nayapul, a small village just 1.5 hours’ bus ride from Pokhara, the trail leads you to Annapurna Base Camp at 4,130m. Throughout the trail, trekkers have stunning vista of the Annapurna massif offering countless opportunities for postcard perfect photographs. Trekkers are also led through a diverse scenery of mountains and lowlands, rice paddies, forests, and natural hot springs. As would be with any popular trail there are plenty of lodging options. The awe-inspiring trek usually ends in Kande, a village roughly an hour’s bus ride outside of Pokhara.

Located in central Nepal, the Annapurna Circuit trek is one of the most talked about and sought-after trekking trails in the country, and for good reason! Trekkers on this trail will cross the world’s widest pass, Thorong-La (5,416 m), witness the world’s deepest gorge, the Kali Gandaki, and have the chance to relax at a hot spring. The landscape is very diverse, giving trekkers samplings of everything Nepal can offer. The trail also provides exceptional views of the Annapurna mountain range as well as Mt. Dhaulagiri and the beautiful Mt. Machhapuchhre (Fishtail). It’s easy to see why this is one of the most famous and talked-about treks on the planet. The trailhead starts in Besisahar, 4 hours bus ride from Pokhara. The finishing point is in Jomsom where you can catch a flight back to Kathmandu, or take a bus back to Pokhara.

This trek offers another way to glimpse Everest that doesn’t involve battling the crowds on the country’s most popular trail. The highlights of the Gokyo trek include hiking next to the Himalaya’s largest glacier, Ngozumpa glacier, and reaching the shores of five gorgeous, turquoise Gokyo lakes, the highest freshwater lake system in the world. The trail also runs through the Renjo La Pass (5,300+), a stunning mountain pass that’s clearly one of the country’s most beautiful. The views of Everest plus three other 8,000m peaks — Lhotse, Makalu, and Cho Oyu — complete the spectacular scenery. Lukla is both the start and end point for this trek as well.

A scenic trek of equal caliber to the aforementioned trails, the Langtang trek is however less frequented by trekkers, thus making it a more intimate experience. The trailhead picks up an 8 hours’ bus ride north of Kathmandu in Syabrubesi and goes through forests and villages of Langtang valley. Along with stunning views of the Himalayas, there are plenty of chances for wildlife encounters along the trail and opportunities to experience the distinct culture and traditions of the Tibetan villages along the way. A day hike to the sacred lake Gosainkunda is a highlight of the trek along with trekking up to the small trekking peak of Kyanji Ri (4,779 m).

If you don’t have a lot of time to tackle some of the longer trails, then the trek to Poonhill is for you. Starting in Tikhedhunga, a village situated 2 hours long bus ride northwest of Pokhara, and ending in Nayapul, the short trek wraps up all the expectations of a trek into a neat package. Trekkers will push through a day-long rigorous hike in Ulleri, enjoy breathtaking views of the Himalayan range from the lookout point in Poonhill, rest at traditional villages like Ghandruk, pass many creeks and waterfalls, and walk through stunning rhododendron forests; all in just under a week.

One of the great circuit treks in Nepal that is not as overcrowded as Annapurna Circuit; the Manaslu Circuit trek is perfect for those who want to get off the beaten track. Starting in Arughat in Gorkha, a remote village only accessible by private 4×4 or local bus, the pristine trail circumvents Mt. Manaslu, the 8th highest mountain in the world, and crosses the majestic Larke Pass (5,213m). The trail runs between the Nepalese and Tibetan border and offers lucky trekkers magnificent views of glacier lakes, plenty of flora and fauna, and endless vistas of the Himalayas.

A relatively new trek, the Panch Pokhari trek picks up in Chautara in Sindhupalchowk, a few hours’ bus ride from Kathmandu. Passing through valleys, gorges, terraced fields, waterfalls, and ancient caves, the trail offers fantastic views of the Himalayas in the northeast and the rich cultural charm of rural Nepal. The true highlight however, waits at 4,100m — Panch Pokhari. The five holy ponds that are only accessible by this trail, are not only a beautiful sight for foreigners, but is also a famous Hindu pilgrimage. The trek ends in Melamchi where a bus can be boarded back to Kathmandu.

This circuit trek takes you to the base camps of third highest mountain in the world, Mt. Kanchenjuna, and offers a rich dose of diversity on the way. Trekkers will enjoy tropical jungle, rhododendron, chestnut and oak forests and ethnic mountain villages with insights into rural Nepalese lifestyle in the alpine region. Less crowded than most trekking trails in Nepal, and a bit rigorous too, the trek offers glorious views of the Kanchenjunga massifs — the five great peaks that make Kanchenjunga, and Mt. Makalu. The trek starts and finishes in Suketar and is considered quite strenuous with steep terrain and a peak altitude of over 5,000m.

The unexplored region of western Nepal is one of the country’s true gems when it comes to trekking trails. Those who have done-it-all and are looking for something different, challenging, and outside the box should look no further than the Dolpo trek. Starting in the lowland valleys and river canyons before crossing 9 demanding high passes along the Himalayan plateau, this trek is one of the most authentic experiences in terms of rugged and raw natural beauty. Highlights include a day spent around the majestic shores of Phoksundo lake and the valley crossing between two 8,000m mountain peaks, Dhaulagiri and Annapurna. Trekking commences in Juphal and finishes in Jomsom, both of which are typically accessed by plane from Kathmandu.

Enter the secret world of the ancient Buddhist Kingdom via the Upper Mustang trail. The trail picks up in Jomsom and follows an old salt caravan route to Lo Manthang. The barren and dry environment is a stark contrast from the rest of Nepal but is still an incredibly interesting landscape. The end game is reaching the ancient medieval capital with the remains of 15th century monasteries and the royal palace. Up until 1992, entrance to this former kingdom was forbidden to foreigners. The policy has since changed, allowing anyone who is up for the challenge to be one of the few travelers to visit this other-worldly place.

This trek has many perks, one of which is seeing Mt. Everest from a completely different perspective – its eastern Kangshung face. The diversity of the environment is also quite impressive ranging from emerald-green terraced fields to waterfalls and glaciers. The true ethnic culture of the Nepalese people can also be experienced during this trek with visits to the local Rai villages and Sherpa villages. During the trek you’ll also get a glimpse of other 8,000m peaks like Lhotse, Chamlang, and Kanchenjunga in the far east. You may even spot some rare wildlife, like the Red panda, who call this area home. The adventure starts with a flight to Tumlingtar and then requires a few hours’ drive to the trailhead in Chichila. The end point is in Num.

The start of this challenging trail is in Beni, few hours east of Pokhara. The Dhaulagiri Circuit is a more rugged and rough trail than many of the others on this list. It winds through the rural Gurung villages, river gorges, the Hidden Valley and French Pass, and high-altitude areas crossing two Himalayan mountain passes. Many of the nights are spent in tents, as opposed to the more comfortable teahouses provided on most of the treks. The serene views of Mt. Dhaulagiri (the seventh highest peak in the world) and other Himalayan giants makes the strenuous trek worth it. Experienced mountaineers partaking in this trek will also have the chance to summit Dhampus Peak, soaring 6,060m. The trail finishes in Jomsom and a flight can be taken back to Pokhara or Kathmandu from there.

This trek is for folks who don’t have too much time but want to hit all the highlights of trekking in Nepal. It’s also the perfect pick for those who don’t have much trekking experience or want an easier hike while still experiencing the beauty of trekking in Himalayas. The Annapurna Gurung trail, sometimes also referred to as the Gurung Heritage trail, allows travelers to experience the traditional Gurung community and their culture with visits to several villages along the way. As the trail winds through the Modi river valley, trekkers are also treated to views of the famous Himalayas, particularly Machhapuchhre and the Annapurna massif. The trek finishes in the village of Dhampus, which is less than an hour’s drive from Pokhara.

A relatively new trail, Mardi Himal trekking trail runs just east of the notorious ABC trail. Far less traveled than most trails, it attracts trekkers who want to experience serenity of the Annapurna range without many people spoiling the experience. The trailhead picks up one hour outside of Pokhara in Kande. The goal of the Mardi Himal trek is to reach the base camp of the same name on Mt. Machhapuchhre. This is one of the shorter treks in the Annapurna region and is perfect for those who can’t or don’t want to spend all of their time in Nepal on the trails. The trail terrain varies from rocky mountains, to pristine forested areas with the best views of Machhapuchhre as well as the whole Annapurna range, particularly Annapurna south and Mt. Hiunchuli. The trek finishes in Lumre, roughly 3 hours outside of Pokhara.

Trekking is Nepal’s biggest attraction and the reason why a majority of travelers visit this naturally-blessed country. Whether you’re a hardcore mountaineer or a novice trekker, Nepal has a trail suited for you. No matter which trail you choose to conquer, the views, experience, and natural wonders of the area will impress at every turn.