When it comes to whisky, the first country that comes to mind is Scotland. Not only are there over 120 active distilleries in Scotland, which makes Scotland the biggest whisky producer in the world, but single malt Scotches are also considered the best whiskies on Earth. With brands like Grant’s, Ballantine’s, Johnnie Walker, Chivas Regal, and J&B, Scotland has maintained its reputation as the top whisky country for at least 100 years.

Many people travel to Scotland just to try the whisky (whisky tourism). However, excellent whiskies can also be found in other countries, so it’s possible to extend your whisky pilgrimage to other countries around the world.

This infographic about whisky includes the other countries that produce whisky. 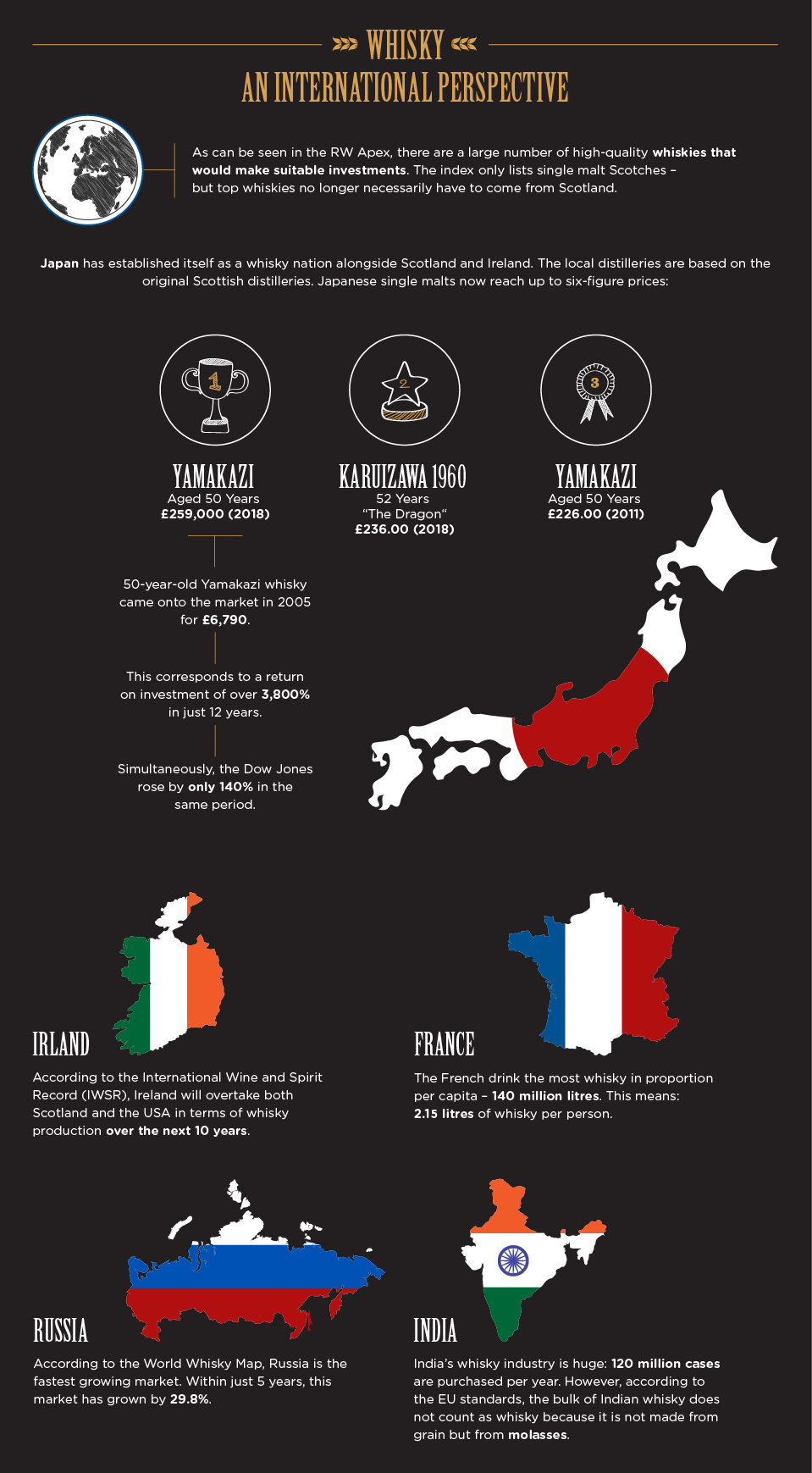 In recent years, Japan has become one of the top whisky producers on Earth. Japanese distilleries are similar to the original Scottish distilleries and they have adopted the same single malt-blended whisky model. Nowadays, Japanese single malts are some of the most valued whiskies, reaching up to six-figure prices. Japan has been a whisky-producing country since the 1920s, but the Japanese whisky has only recently won several international whisky awards, which enhanced their reputation as one of the leading whisky nations in the world. Some of the most prominent whisky distilleries in Japan include Yamakazi, Karuizawa, Chichibu, and Hakushu.

Alongside Scotland, Ireland has always been considered to have some of the best whisky distilleries. Until the late 19th century, Irish whisky was the most popular spirit on Earth. Some people even claim that Ireland is the home country of whisky, while others believe that title belongs to Scotland. Irish whiskies are usually distilled three times. Since 1990, Irish whisky has been the fastest-growing spirit in the world. In fact, when it comes to whisky production, The International Wine & Spirit Record (IWSR) predicts that in ten years Ireland will exceed Scotland and the USA. Ireland currently only has seven active distilleries, however, these distilleries, especially Jameson, are highly valued throughout the world.

France may not have the most popular whisky brands and distilleries in the world, nor does it have the largest production. However, according to a study, the French are the largest consumers of whisky (especially Scotch and the American Jack Daniels) in the world. The study shows, that the French drink 140 million litres of whisky per year, which is 2.15 litres per adult. Whisky is rapidly becoming the French national drink. Due to relatively low prices, whisky is consumed by people of all social classes in the country.

Whisky is also big in India. They are selling over 120 million cases per year. As the majority of Indian whisky is not made from cereals/grain but from molasses, according to EU standards the Indian whisky doesn’t count as whisky at all. In order to complement the flavour, many Indian distilleries use the dressing of Scotch Whisky. Nonetheless, Amrut Distillers and some other prominent distilleries which do meet European Whisky regulation standards, are widely praised for their remarkable quality.

In terms of whisky, Russia is the new kid on the block. The country is rapidly emerging as the fastest growing market in the world. Vodka may still be the most consumed alcoholic beverage in Russia, but whisky is becoming increasingly popular as well. In fact, according to the World Whisky Map, the market has grown by 29.8% in the last five years alone.

This information come from “Whisky as an Investment Object” – an Infographic by hotukdeals. Here is the full infographic.