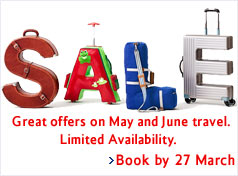 British Airways March sale has started and includes hundreds of great value holiday packages as well as flights to more than 90 worldwide destinations for various travel departures between March 15, 2012 to January 31, 2013.

Discover a new city or just enjoy a short break to Europe with two nights in Nice starting from £159 per person. Alternatively, explore the Costa del Sol and enjoy a seven night fly-drive to Malaga from £129 per person

Some of the best offers are listed below: