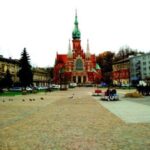 Have you seen Schindler’s List movie by Steven Spielberg? If not, I would recommend it to everyone. It’s a story about a man who went down in history of Jews during the World War II. The titular list refers to the list of Jews saved from their deportation to Auschwitz-Birkenau concentration camp and thereby, from […]