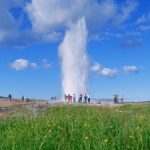 Iceland has become a popular stop-over destination for those flying between North America and Europe. Even though Iceland looks high up on a flat map, it’s actually on or near the flight paths of many routes that cross the Atlantic. This island in the north Atlantic is the literal meeting place of North America and […]